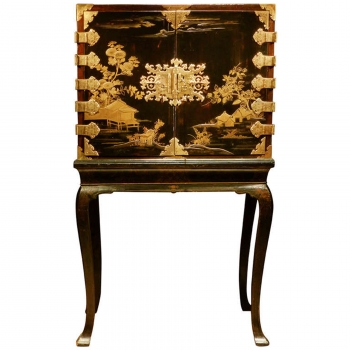 This rectangular lacquer cabinet is characterized by the hinged doors decorated with a Japanese landscape with houses and trees in gold lacquer. The sides with a scene of a flowering branch. The top with a scene of a landscape with houses and a tree. The doors with ornate engraved hinges and lockplate revealing an interior of ten drawers with copper handles and mounts decorated with foliage.The doors and drawers with nashiji-decorated interiors. On an associated stand with a cavetto and cushion-moulded frieze on square ca briole legs

In the seventeenth century in The Netherlands and elsewhere in Europe, there was a growing interest in exotica. Because of voyages and trade, for example, the Dutch East India Company with overseas territories, the Dutch came in contact with exotic objects. Because they came from far away they were exclusive. For wealthy citizens they formed an attractive way to diffirentiate. In China and Japan they made beautiful lacquerware and porcelain. Which was very popular in the seventeenth century in Dutch and other Western interiors. Wealthy citizens and noble people decorated their houses with rare Oriental objects. European royal houses eagerly bought at auctions of the Dutch East India Company.
Japanese export lacquerware was one of the many goods that the VOC shipped from Asia to Europe. The lacquerwork was made in Japan for export and delivered in all forms, such as suitcases, trunks and boxes. An important part of the lacquerware trade was formed by  from so-called ' comptoirs ', or cabinets. A cabinet is a large, rectangular wooden box with a valve or two doors. Behind them a number of drawers to keep a bit of everything; jewelry, letters, curiosities, etc. The casket and drawers feature Oriental scenes in gold lacquer on a black lacquered surface. All with  rich decorated mounts. Usually a cabinet stood on a matching stand. These, however, are never made in Japan.
Japanese lacquer cabinets regularly stood as a kind of art cabinets in arts and collector cabinets in the reception rooms. Collecting exotica was in general something for the master of the House. The ladies were bussy setting up and showing off with there doll houses.
Making Japanese lacquerware was fiddly, took a lot of time and was very expensive. Eventhough the lacquerwork was popular it did not bring the VOC much profit because of the size of the cabinets they took up to much space in the hold of the ship. The trade in Japanese lacquerware was therefore only a small part of the VOC trade with Japan. It was purchased on a limited scale, initially in Hirado and after 1641 in Nagasaki. Since then the trade went through Deshima, a small artificial island in the Bay of Nagasaki.
Especially in the seventeenth century lacquerware came to Europe. The highlight of the trade in Japanese lacquerware was between 1635 and 1670.