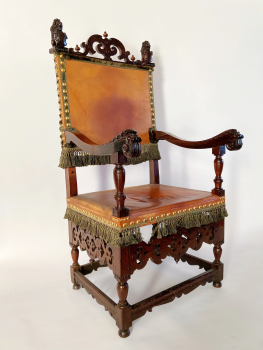 richly carved armchair with straight back, the openwork back rail with on either side lions holding shields, each armrest ends in a sea-monster emerging from under an acanthus leaf, on four baluster turned legs, the toprail of the base is executed in pierced strapwork, upholstered with brown leather with a band of tassels, unusual for a chair like this is the rich carved back so the chair could be placed free in a room.

This type of chair with straight legs and straight upholstered back and seat derives from 16th century Spanish examples and was in fact know as a "Spanish chair" in the Northern Netherlands during the 17th century. The Rijksmuseum in Amsterdam has an almost identical chair in its collection: inv. no. R.B.K. 16019
Literature:
Castle Nijenhuis, Catalogus van den in boedel en de verzamelingen van het Kasteel "Het Nijenhuis" te Wijhe, 1934, lot nr. 95, illustrated;
For an almost identical armchair in the collection of the Rijksmuseum Amsterdam see:R. Baarsen, Wonen in de Gouden Eeuw, 17e eeuwse Nederlandse Meubelen, Amsterdam, 2007, pp. 62-64, ill. 55, 56 and 57.