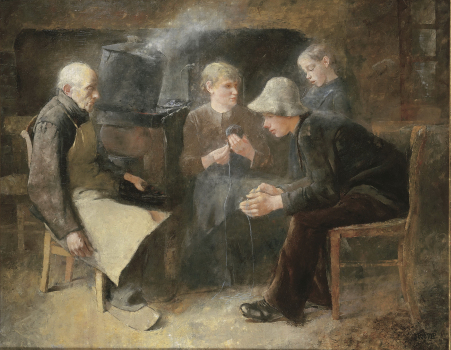 Farmers interior with left an old man, in the middle a woman with yarn, on the right a boy holding the wool with behind him a girl holding knitting pins, in the back a washing boiler and to the right a showcase with glass.
This painting is the largest Toorop made in his career.
In 1882 Jan Toorop went, together with Antoon Derkinderen to Brussels in order to take courses at the Academie Royale des Beaux-Arts. Brussels was the center of a remarkable renewal in painting. It was his involvement and his friendship with the members of Les Vingt that brought about a change in his career. It had been intended that Les Vingt should consist of Belgian artists only, so Toorop's membership was voted for a year by van Theo van Rijsselberghe, Ferdinand Khnopff and James Ensor. Not for personal or artistic reasons, but purely in order to maintain the principle. However he was co-opted in December 1889 all the same.

A year before Toorop started this huge, monumental painting. 'Garenwinden' (Winding yarn) relates very much to the style of the painters who worked near the village of Machelen, like Ensor and Guillaume Vogels. Quite remarkable are the broad strokes of the thick paintbrush and the use of the palette-knife which Toorop must have learned from Ensor and Vogels. Although still academic in its composition, this painting shows his talent as a painter and a draughtsman and it must have been a daring undertaking for the young artist. In his early years Toorop was very much interested in the social and human conditions of the peasants and the working class. Here he represents the laboring class in a natural surrounding without the dramatic and symbolic meaning that we know from his later work. As Siebelhoff states: "The monumentality of the life size figures is typical for the academic tradition. The compact rounded figures remind one of a Millet and the features of the young man to the right remind one of Constantin Meunier sculpture" With this painting Toorop presented himself as a serious artist who must have made a big impression on his new artist friends in Belgium.