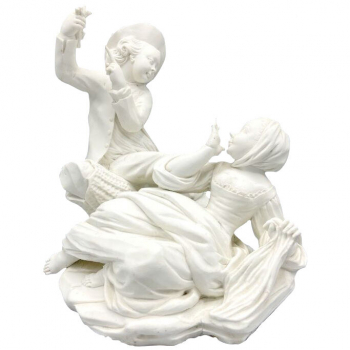 after the 1760 model of Etienne-Maurice Falconet 'Biscuit' comes from the French 'bis-cuite', meaning 'twice baked', although the term is most commonly used for unglazed wares that have had only a single firing. This is because the first 'baking' implied in its original usage would have been to fuse raw materials, not for firing the shaped ware. Unless made from materials that vitrify at high kiln temperatures, biscuit ceramics are porous. To make them impervious to liquids, they require a glaze and a second ('glost') firing. But sometimes porcelain figures and ornamental wares are left in the unglazed biscuit state for aesthetic reasons. These porcelain figures were much more expensive than glazed and enameled versions, as there was no covering to mask imperfections. Although white, porous and difficult to clean, biscuit porcelain was fashionable for the decoration of dining tables in 18th-century France and Britain.

A set of three Qianlong dishes

A pair of Royal vases