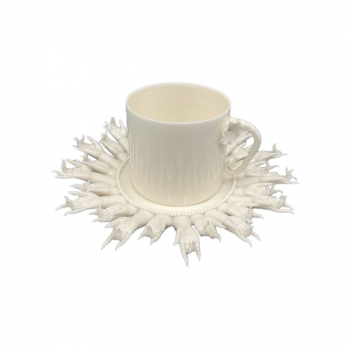 Plain cylindrical cup, the handle shaped as lotus stem flanked by a flower, the saucer decorated with a ring of tiny hands with long and thin fingers. The applied decorations are all modelled by hand and carefully applied onto the surface of the cups and saucers, which are instead made in moulds. Cup: H. 6 x diam. 6,7 cm; Saucer: H. 2.8 x diam. 15,5 cm

Peter Ting is a Senior Designer at Asprey, London and a respected curator. He served as the Managing Director of Thomas Goode in 1994 and later designed 40 new patterns for the company.
He set up his own company Tingware in 1987 whose products can be found in major stores worldwide. His delicate porcelain design even attracted the attention of Her Majesty, Queen Elizabeth II of the United Kingdom of Great Britain, who commissioned the designer to design the state gift to the president of Brazil.
His other clients include Barneys, Henri Bendel, Neiman Marcus, the Four Seasons, and Harrods. His work is in the permanent collections of the V&A Museum, Brighton Museum, and Hong Kong Museum.

A set of three Kangxi bottles