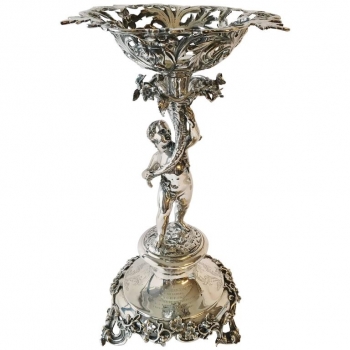 Raised on a high-domed and waisted base with cast grapevine, on three openwork scroll feet, surmounted by a winged putto having a draped garland of flowers around him holding a cornucopia edged with flowers, supporting a openwork detachable dish of scrolling foliage which was probably originally fitted with a now missing cut-glas bowl. The base engraved with foliage, Grabham family crest and motto: "L'esperance du salut" and with inscription: "Presented to John Grabham Esq.re.M.D. on his leaving Rochford as a mark of gratitude for professional services and a token of affection from many sincere friends. June 1852".

Each part is fully marked, London, year 1851 (q), Maker's mark crowned ISH (John Samuel Hunt, senior partner in Hunt & Roskell, successors of the Paul Storr firm, the most important English Royal silversmiths of all time). The base is further stamped with the retailer's mark "HUNT & ROSKELL, LATE STORR, MORTIMER & HUNT", serial number 5806.
Hunt & Roskell was the continuation of the well known firm of Storr & Mortimer, the business formed by Paul Storr and John Mortimer in 1822 after Paul Storr had severed his connection with Rundell, Bridge & Rundell. In 1826, Storr & Mortimer were joined in partnership by Paul Storr's nephew, John Samuel Hunt, who had worked for Storr for many years as a Chaser. Following Paul Storr's retirement in December 1838, the business was restyled Mortimer & Hunt, the partners being recorded as John Mortimer, John Samuel Hunt, and his son, John Hunt.
John Mortimer retired in December 1843, and John Samuel Hunt and John Hunt entered into partnership with Robert Roskell and Charles Frederick Hancock, and the business name changed to Hunt & Roskell. In January 1849, Charles Frederick Hancock left the partnership to start his own business.