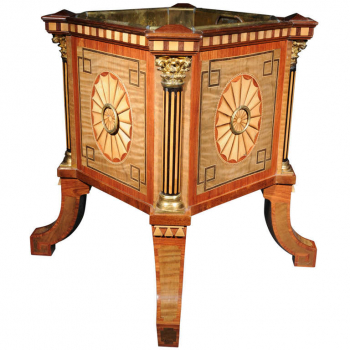 A Dutch teawarmer or bucket attributed to Matthijs Horrix

A Dutch teawarmer or bucket attributed to Matthijs Horrix

square, each side with fan-shaped marqueterie within a meander border, the bevelled edges are placed on Korinthian half-columns of ebony with an intarsia of "trompe l'oeil" cannalures of boxwood, on four cabriole feet, copper liner.

Matthijs Horrix was born in Lobberich near Krefeld, Germany and entered the cabinet makers guild of the Hague (St Josefsgilde) in 1764. In The Hague the French court style was closely followed, as a result of the Stadholder's court and the influence of foreign embassies. The French fashion had a strong influence on the work of Horrix who called his shop "In de commode van Parijs tot Den Haag". Horrix was also commissioned to re-furbish the Royal residences following the marriage of Stadholder Prince William V to Princess Wilhelmina of Prussia in 1767. Now, still three commodes attributed to Horrix remain in the Royal collection at Palace Huis ten Bosch.