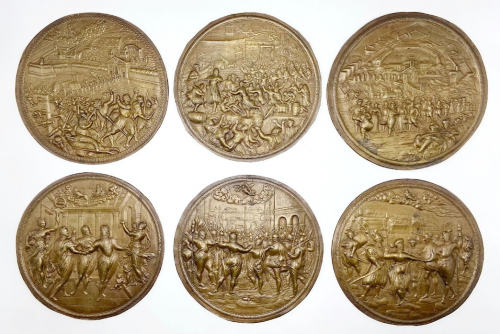 A series of six reliefs of "the liberation of Antwerp 1577"

A series of six reliefs of "the liberation of Antwerp 1577"

A series of bronze plaques of the historical event, the liberation of Antwerp by the Estates General in August 1577. Based on the original designs of painter Martin de Vos (1523-1603).

De Vos designed a set of seven roundels in ornamental frames showing the liberation of Antwerp. These were engraved by the Wierix brothers in 1577 and published by Pierre Baltens. It is reasobable to assume that the translation of the designs into relief took place in Antwerp soon after the events when demand would have been greatest. No complete series seem to have survived and no collection possesses all seven of de Vos's designs. One scene: De Bours handing over the keys of the citadel to De Liedekerke, is not yet known  as a relief. The other six scenes exist in various permutations in museums and private collections mostly in led or pewter but occasionally in bronze or sometimes gilded. The current set includes the other six historical events:
The pact between Bours, Liedekerke and Roeck, 1 August 1577;
Bours drives Merville and Treslong out of the Citaldel, 1 August 1577;
The Oath of the Victors, 2 August 1577;
The Conference between German mercenaries and Roeck, Bours and Liedekerke, 2 August 1577;
How the Germans left Antwerp, 2 August 1577;
The demolition of the walls of the Citadel facing the town, 23 August 1577.
The Victoria and Albert Museum also has a set of six bronze reliefs, which was purchased in 1975, but this set comprises five of the designs of de Vos and one extra roundel of the Spanish fury 5-6 November 1576, no direct prototype of this scene has been discovered. The Rijksmuseum in Amsterdam has a series of six led plaquettes depicting the sames scenes as the present series.