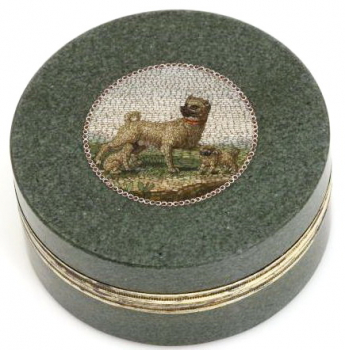 A green hardstone circular box with detachable cover set with a micromosaic depicting a mother dog nursing a puppy and protecting an other puppy with her paw, silver-gilt mount.
The micromosaic was probably made by Giacomo Raffaelli, an expert micromosaicist. Raffaelli was born in 1753 and died in 1836 in Rome. He is celebrated as a one of the best artists working in hardstones and mosaics in his day and credited as being the inventor of micro-mosaics.
Many of the major European galleries, museums and collections house works by Raffaelli in their permanent collections.
The term 'micromosaic' is used to describe mosaics made of the smallest glass pieces. Some micromosaics contain more than 5000 pieces per square inch. The earliest attempts at micromosaic revealed visible joins between the pieces (known as tesserae) and a lack of perspective. Later artists such as Antonio Aguatti made huge advances in micromosaic technique, resulting in renderings that were truer to life. Glass micromosaic technique developed in the 18th century, in the Vatican Mosaic Workshop in Rome, where they still undertake restoration work today.