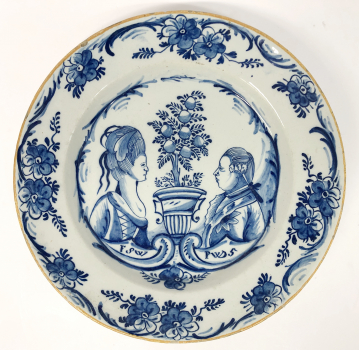 painted in blue and white depicting the double portrait of "PWD5" Prince William V (1748-1806) and his wife "FSW" Frederika Sophie Wilhelmina of Prussia (1751-1820) centred by an orangetree in an urn, with ochre-lined rim, rimfrittings.
Delftware objects depicting Dutch Monarchs, Royal Coats of Arms and symbols of the Royal House such as the orange tree are known as Orangist Delft. The tradition to adorn the house with symbols of the Kingdom reached its height during the third quarter of the 18th century when Prince William V was preparing to ascent the crown. This Orangist dish depicts the double portraits of Prince William V and Wilhelmina of Prussia who married in 1767.
Provenance:
Privat Collection HRH Princess Christina of The Netherlands;
Sale The Collection HRH Princess Christina of The Netherlands, sale AM0568, Sotheby's Amsterdam, 19 and 20 November 1996, lot 34.
Privat Collection The Netherlands.

A set of three Kangxi bottles