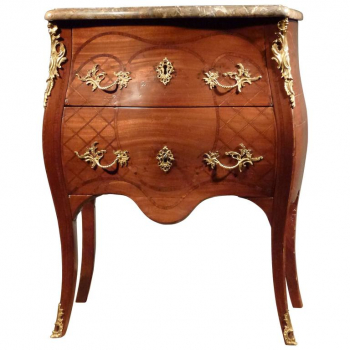 The grey-white-rose marble top above two drawers "sans traverse", with a marquetry of trellis, ormolu bronzes, on cabriole legs, with impressed stamp JG (for Josefs Gilde) with the crowned coat-of-arms of Amsterdam.

To protect their craftmanship, the The Hague and Amsterdam furniture makers guild complained about the vast amount of mainly French furniture which was being imported into their cities. The Amsterdam furniture Guild of Saint Joseph made  succesful complaints and on January 29th 1771, the import of foreign furniture was banned.
Dealers with foreign stock were allowed to sell their furniture for another three months, provided it was stamped with the mark of the Guild of Saint Joseph. Regrettably the number of pieces known, bearing the Saint Joseph stamp, is quite small. The stamp is also found on some furniture other than French, such as this commode and two other known examples which, altough exucuted in the French style, is undoubtedly Dutch. In these cases the French look probably led the officals applying the stamp to believe it to be of foreign origin.
Literature:
Reinier J. Baarsen, Aspecten van de Nederlandse meubelkunst in de tweede helft van de achttiende eeuw, 1993, Drukkerij Vis Offset, Alphen a/d Rijn,pp. 157-173