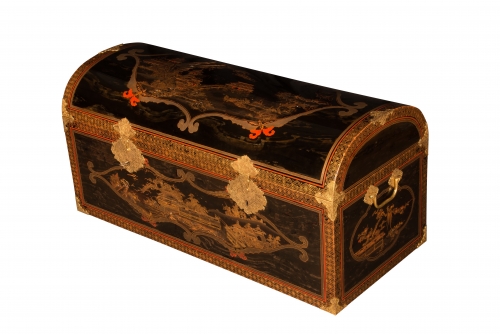 rectangular Japanese transition style coffer with domed cover with fire gilt copper fittings. In pictorial style with a fine decoration in various techniques: takimaki-e (high relief), tsuke-gaki (drawing with narrow lacquer lines and over sprinkling with gold and silver fillings), usuniku-takamai-e (demi relief), kimekomi (pushed inside) and accents of kirigane (small geometrical cut metal mosaic). Very rare to see is that the cartouches on the coffer are on a wood grain ground called ‘Mokumé’ which is a pattern applied with gold-dust to suggest the presence of woodgrain. The cartouches are decorated with butterflies (mukai cho), within the cartouches a landscape of rocks, trees, flowers, birds and Japanese pavilions and pagodas and fences with architectural details. The inside of the cover with wisteria vines and a phoenix. All-over decorated with symbols referring to Japanese family crests. Bronzes re-gilt and restorations to the lacquerwork.

Lacquer work with Mokumé in such a large scale is very rare on a large coffer like this. The only comparable pieces are in the Groninger Museum, who also have a lacquer coffer with Mokumé in their collection (inv. 1988-24) sold to them by Pieter Hoogendijk and another coffer exhibited by Pieter Hoogendijk at TEFAF Maastricht in 2011, sold to a private European collector.
Japanese export lacquerware was one of the many goods the VOC shipped from Asia to Europe. The lacquerware was made in Japan for export and delivered in all forms, such as suitcases, trunks, boxes and cabinets. The first shipment of lacquerware by the VOC had disappointing sales, northwestern Europeans were unfamiliar with lacquer or did not like the Namban style and were not prepared to pay the high prices demanded. The company and the States-General presented special consignments as gifts to rulers and high officials of foreign countries. They continued to ship lacquerware and the demand increased. After the early 1640’s, when larger shipments of lacquer began to arrive regularly in Amsterdam, agents of the various Royal Houses in Europe came to buy at the VOC auction. Towards the end of the seventeenth century, it became increasingly difficult for the Company to buy good quality pieces at acceptable prices. The account books of the Company show that after 1693 not a single piece of lacquerware was shipped from Japan.
Making Japanese lacquerware was fiddly, took a lot of time and was very expensive. Even though the lacquerware was popular it did not bring the VOC much profit because of the size of the pieces, they simply took too much room in the hold of the ship. The trade in Japanese lacquerware was therefore only a small part of the VOC trade with Japan. It was purchased on a limited scale, initially in Hirado and after 1641 in Nagasaki. Since then the trade went through Deshima, a small artificial island in the Bay of Nagasaki.
Cf. Oliver Impey & Christiaan Jörg, Japanese Export Lacquer 1580-1850, 2005, pp. 27-29.